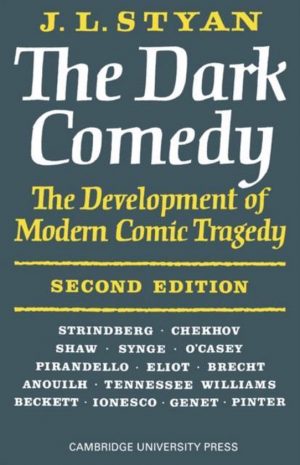 Much of twentieth-century drama defies the traditional pigeon-holes of tragedy and comedy: the heroes are not straightforwardly heroic; the subject-matter seems at some times grimly realistic and at others nearer to pure fantasy. Professor Styan explains and illuminates the nature of this dark, paradoxical comedy. He reminds us, first, that this is not a purely modern phenomenon: many great plays of the past have similarly defied classification and have called for an equally vacillating response from their audience. But nonetheless this dramatic genre has had its clearest expression in the last sixty years: we are shown in detail how its techniques have developed from Ibsen and Chekhov to Pirandello, Brecht and contemporary playwrights such as Ionesco, Beckett, Tennessee Williams and Pinter. The author brings us to realize that the playwright, by creating complex tensions in the action of the play between the actor and the audience and within the individual spectator, is able to explore new areas of human feeling and response. In this second edition of The Dark Comedy Professor Styan has brought the book up to date in relation to recent plays and theatrical developments. He has modified some earlier judgements and added detailed analyses of scenes from Brecht’s Mother Courage and from Beckett’s Waiting for Godot. Anyone who takes an intelligent interest in theatre-going will find profit and stimulus in this book. It covers a wide range of subject-matter; but its underlying theme is clear, forceful and unified.